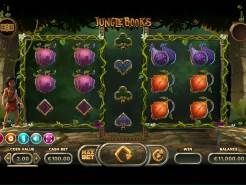 Play Now
Just as the title suggests, this game is based on the original Rudyard Kipling book Jungle Book that was made even more famous and popular but the movie that has recently been remade. In the story Mowgli a young boy is left in the jungle by his parents and he is brought up by a pack of wolves. After a number of years it becomes apparent that it is best for the young Mowgli to return to the man village but his return is hindered by the treacherous Shere Khan who is out to get the young man cub. Mowgli is helped by Baloo the bear and the sensible panther Bagheera. This slots game centers on the story and has as its leading figures Mowgli, Shere Kahan, Bagheera, Baloo and the deadly tricky snake.

Five Different Realms with Special Features Offered in Each Realm

This slots game is unlike any other slots game. It is made up of five different realms and each realm is hosted by one of the five main characters. Within each realm other hosts can visit and there are two special features per realm. Players can easily pass from realm to realm and in each realm the number of paylines varies. The snake and Shere Khan both have 68 paylines with the other realms having 45 paylines. In each realm a new wild fruit is chosen as the wild symbol and this is identified to the player at the beginning of the game. During the spins random multipliers are offered, there are spreading wilds, synced reels where two reels stick together and offer more winning payouts, there are re-spins and even stacked wilds. A honeycomb bonus gives the player a chance to win up to 50000 coins when choosing different honeycomb symbols.

Jungle Books slots takes some getting used to because of the many different features of the game and the five different realms that could be considered five separate slots games. Each realm always sees the host of the realm at the side of the game conducting and watching what is going on. The bets made are carried across each realm and there are opportunities to increase the number of coins and the number of paylines bet on with each new spin. It is a complex game but once it is understood the player will really appreciate the graphics, color and wonderful payouts that it offers.
Play Now

Where to Play Jungle Books Slots