Reel Spinner: New Slot from Microgaming will have you Hooked 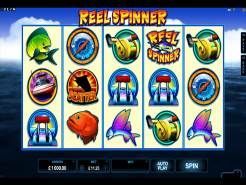 Play Now
Reel Spinner is a new five reel and 15 pay line slot game that has a deep fishing theme. Reel Spinner can be played on desktop, mobile and tablet devices. The highest win is 10,000 times your bet, which can be as high as $112,500. There are a few added features including a two step approach Free Spins feature where you choose from a selection of boats to win as many as 20 free spins and then cast a line into the water to determine your multiplier. Microgaming has set the game to accept coin values ranging from fifteen cents per spin up to $11.25 per spin. Reel Spinner went live on July 6, 2016. The symbols used in Reel Spinner slots are very colorful and include fish, boats, fishing reels, the throttle, fishing tackle, and compasses, to name a few. The Swordfish is the scatter symbol in this slot game and is the symbol used to trigger the bonus feature, when you get at least three of them. You will find stacked wilds throughout the game from the Reel Spinner logo, which is wild and will substitute for all other symbols except the swordfish scatter.
Play Now

Where to Play Reel Spinner Slots