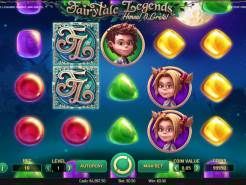 Play Now
NetEnt released Red Riding Hood to great acclaim not too long ago, as the first title in its Fairytale Legends selection of games. Now, we have discovered what the sequel is – in the shape of Hansel and Gretel. NetEnt has developed a superb game that has the same look and feel as the original fairytale slot, but Hansel and Gretel stands out in its own way. The slot features five reels and 10 bet lines, and lots of coin values to play out over 10 bet levels, too. It also comes with three random features, including the Fairy Wonder Spin, Fairy Wild Spin, and Fairy Surprise. The game also features no fewer than three bonus features to potentially enjoy. According to NetEnt, this title is the second in a trilogy of Fairytale Legends games. The final title will be revealed later in 2017, capping a hugely-successful selection of games created by the leading software game developer. We await the final title with bated breath – and we are sure you do too. Watch this space for more news when we have it!
Play Now