Jason and the Golden Fleece Slots 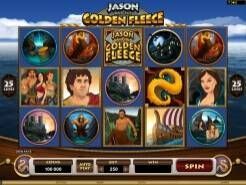 Play Now
Greek myth and excitement mix in this microgame. Become part of the story when Jason and his mighty sailing crew – originally known as the Argonauts, goes in search of the Golden Fleece from a mythical ram. Only by undergoing a number of tasks can Jason claim his rightful throne. Join in and help him on his way. Play up to six bonus games – all that can help Jason reach his goal and you win a potentially large payout.

Reeling Jason And The Golden Fleece

Jason and the Golden Fleece Slots also feature a bonus trail feature. You can win up to 10 free spins – all triggered by the various wild and scatter symbols. The bonus trail feature - Jason’s Journey Bonus, actually consists of 6 destination games. Enhanced by the game’s unique art, you join Jason and his crew as he sails from Iolcus and faces his enemies. The dragon that guards the Isle of Colchis, the Bird-women Harpies, the half-horse, half-human centaurs and Sirens all appear. Follow his trip on the map as he visits first Iolcus then Mysia, Symplegades (the clashing Rocks), Crete, Sirenum and Colchis. Find the hidden rewards and uncover the secret multiplier through spinning a bonus wheel or by being triumphant in a High-Low card game. The rewards are free spins, multipliers and even prizes.

If you want to make Jason or his enemies pay, you need to get identical symbols on adjacent reels. In this case, you need at least three. The highest paying symbol is, of course, Jason, himself. Yet, it does not start or end here. It all begins when you activate the Golden Fleece symbol. This will help trigger the game’s trail bonus. This sets Jason up for more adventures and you for more games – once you master the first of the six. This increases the potential of a bigger payout. This may range anywhere from to 12,500 coins to 37,000 coins. It depends upon whether you match symbols, spin the jackpot wheel or guess the High-Low Cards correctly. How you reach the payouts like the game is inventive. For instance, when visiting Colchis, you need to craft a sleeping potion to lull the Dragon. In doing so, you can seize a sizable fortune.

If you want to succeed in winning this game, think and act like Jason. In other words, apply all your speed, skill and innate cunning to face and conquer one challenge after another. In this way, you will obtain the very treasure you, like Jason, crave.
Play Now

Where to Play Jason and the Golden Fleece Slots