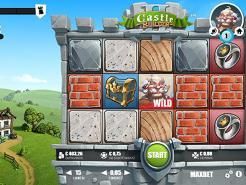 Play Now
Castle Builder is one of the most successful slots ever created by the leading software provider Microgaming. So, perhaps it was only a matter of time before they followed up on that success by releasing Castle Builder II. This seems to be the case, because they are all set to release the follow-up in the second quarter of 2017. It has also been promoted at the Microgaming Bar at the ICE Totally Gaming event for 2017. The original game was nominated for an award back in 2013, so the creators will be hoping its sequel will be equally well-received. The idea is to build castles – hence the title – and to unlock further achievements and possibilities as you play. The new game is set to provide three characters to choose from, and will present 15 kingdoms. With dozens of castles available to build, five reels to spin and plenty more characters to encounter, Castle Builder II looks set to be one of the biggest and best releases coming to the world of online slots this year.
Play Now