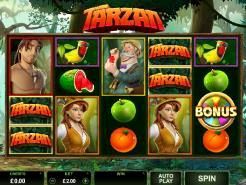 Play Now
If you’re familiar with Tarzan (who isn’t?) and you have read some of the novels by Edgar Rice Burroughs, you’ll be delighted to hear the jungle hero is all set to star in what could well be a range of online slot games in the near future. Microgaming has done a deal to acquire the exclusive rights to the Tarzan brand – a licensing agreement that is set to come to fruition in the shape of the very first slot game later this year. Few other details are known as yet, but this should prove to be one of the biggest launches of a slot game online for some time.

He is a jungle-based character that was created back in 1912, making him over a century old to date. His popularity hasn’t waned in the intervening years either – in fact, if anything he has become more popular. He is also famous for his lady friend Jane, who also looks set to appear in the new online slot game soon to be released.

Will the new Tarzan online slot game be worth waiting for?

It certainly looks that way. The CEO of Microgaming, Roger Raatgever, has seen a prototype of the game and he said it “will not disappoint”. We don’t know exactly when it will be released – a firm date will be given nearer the time. However, they have said it will be this coming winter, and before the end of 2016. What a way to celebrate the end of another year! Edgar Rice Burroughs, Inc has come to an agreement to license the Tarzan brand with Microgaming. The President of ERC Inc., James Sullos, gave a confident statement that spoke of the group’s pleasure at the deal with Microgaming. No doubt fans of Tarzan – and those who play every Microgaming release as and when it comes out – will be watching and waiting to see what this new release will have to offer.

Watch and wait for the famous Tarzan jungle yell!

Yes, the famous yell will also be included within the game. We have no idea what features it is likely to have for players, but with Microgaming at the helm this is sure to be one of the most hotly-anticipated game releases this year. Will you be ready to play the Tarzan online slot from Microgaming when it finally goes live this year?
Play Now